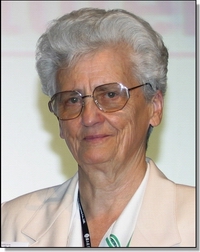 March 2011 — It is with much sadness that we announce the passing of Claude-Nicole Hocquard at age 83.

Renowned for her innumerable contributions to the audiovisual and museology fields, her unwavering service to ICOM knew no bounds; her personal contributions and efforts were immense.

She was the impetus for the creation of AVICOM in the early 1990’s — a time when the field of museological audiovisual was in evolution and a time when our colleagues sought a forum well-versed in advancing technologies. AVICOM became such a forum for dialogue.

Constrained as she was to due health reasons over the last few years, AVICOM nevertheless continues to benefit from the knowledge she imparted, and continues to be guided by the values for which she so diligently advocated.

Her absence will be profound felt, and we shall render her homage more befittingly in the very near future.

Claude-Nicole Hocquard was a filmmaker. She has a number of audiovisual documentaries on artistic techniques to her name. In the 70’s and 80’s, she filmed the entirety of the restoration of Versailles’ Chambre du Roi (as it was in 1798). This project broke ground for a new wave of films later produced by major museums, such as the film about the Louvre’s major restoration project. The pioneering film “Restauration de la chambre du Roi” is the only film of its time to capture the restoration project at Château de Versailles.

Produced and distributed by NEYRAC Film, joint custodian and trustee of the collection with CNC – Images de la culture.