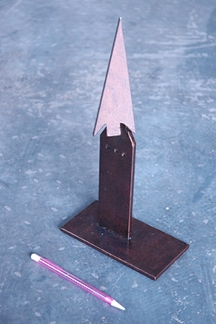 The Fiamp.2006 trophies were created by the Moroccan artist Mustapha CHADID.

Weighing 1 kg and 25 cm in height, the trophy is in rough metal with a copper finish.

The inspiration for the piece was the computer cursor, which seeks, shows, selects, and reveals.The cursor also recalls the shape of the bell-towers of Vienna, the Town of Culture that welcomed the 21st General Conference of the International Council of Museums during which the AVICOM Awards Ceremony for Fiamp.2006 took place.